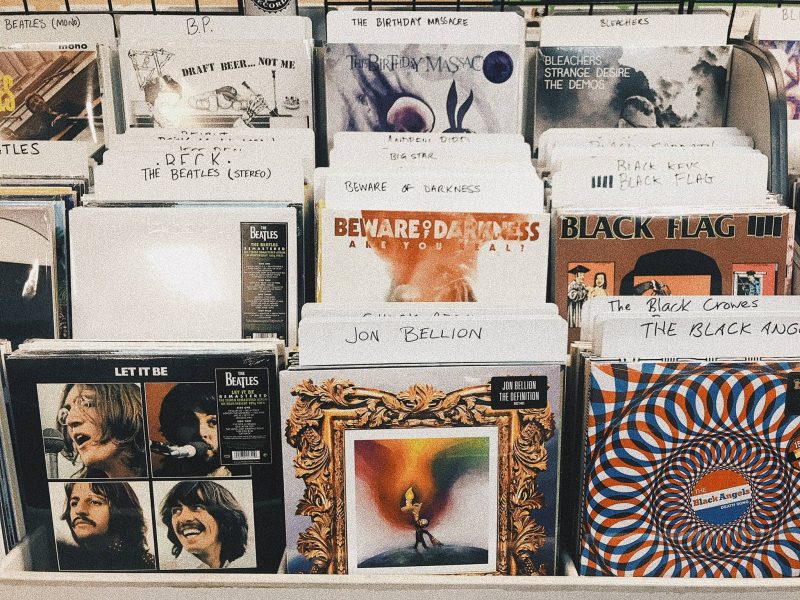 Music follows us through life. It accompanies and evokes key moments, days and even whole eras. These classic albums were written in times of grief, from the despair of losing friends and lovers to the end of a relationship. Dwell in their rich seams of sadness, frustration and anger and be comforted by some surprisingly uplifting and redemptive notes.

In 2015, Nick Cave’s 15-year-old son Arthur died when he accidentally fell from a cliff. The band’s 18th album, Ghosteen, is the outpouring of his grief and one of the band’s most beautiful creations to date. Cave says he’s since been transformed and that he now has more empathy towards others, feeling an absolute understanding of their suffering. Many will relate to his simple hope, ‘I’m waiting for peace to come’.

Meet the furious glory and magnificent articulation of a woman scorned. Brought up to believe that ‘if life gives you lemons, make lemonade’, Beyoncé’s husband Jay-Z’s infidelity made her release her old understanding of their marriage to begin anew. Brave, angry and phenomenal on every level, it ends on a lifted note. ‘If we’re gonna heal, let it be glorious.’

The score of Rush is remembered for Clapton’s elegiac ‘Tears in Heaven’, recorded after his four-year-old son, Conor, fell to his death from an open window. Rush also features intense and darkly passionate blues instrumentals but it’s Clapton’s grief that carries the loudest message. ‘I must be strong and carry on, ‘cause I know I don’t belong here in heaven.

To immerse in Back to Black when heartbroken is to marvel at Winehouse’s talent and enduring sadness afresh. It’s more poignant still following her death of alcohol poisoning in 2011. In ‘Rehab’, treatment is refused because drugs can’t heal heartbreak; self-sabotage despite self-knowledge are pervasive themes. This singular album is honest and dark. It simmers with infidelities, heartache and the frank acceptance that she did it to herself: ‘You know I’m no good.’

In an unusual music industry twist, Marvin Gaye had to write his next album for (and give its profits to) his newly ex-wife, Anna Gordy. The harrowing Here my Dear is her legacy. The album is an intimate account of a devastating breakup at a time when Gaye was suffering from depression and addictions. Though he’d already fallen in love with someone else by this point, Gaye said, “I did the record out of deep passion. It became a compulsion. I had to free myself of Anna, and I saw this as the way.”

Mercury confronts his own mortality in his final album Innuendo, recorded shortly before his death of AIDS-related pneumonia. The band describes Mercury as prolific and tranquil during this time; as a man staring down the barrel of death yet who vowed to “keep working until I ****ing drop.” His make-up may be flaking, but his smile still stays on. Fitting final words from a man who accepts that life will continue without him in ‘The Show Must Go On’.

This ruminative album is natural, raw and acoustic. It was written in a remote Wisconsin lodge by a haunted and heartbroken Justin Vernon following band and relationship break ups. In snow-surrounded solitude, his mesh of memories and chords exposes regrets yet doesn’t free them, exorcises emotions without fully revealing them. Love, loneliness, grief and letting go delicately combine to create an album for anyone who’s ever loved and lost.

In 2013, Wilko Johnson was diagnosed with late-stage cancer. It changed everything, making him feel ‘vividly alive’. Plans for a farewell tour and album were launched, yet Johnson didn’t fade. The prognosis was wrong. Johnson’s battle now is coming to terms with the fact that his death isn’t imminent after all. A nice problem to have. Listen to Going Back Home to bathe in the joie de vivre of a man who thinks this is the last time he’ll get to share his love of music with the world.

Good Grief, Bristol (May 11th to 17th 2020) is a new festival to help people talk, think and learn about grief.

With dozens of events taking place all over Bristol, Good Grief will bring together speakers, film screenings, exhibitions, workshops, music, spoken word and a Memory Kitchen.