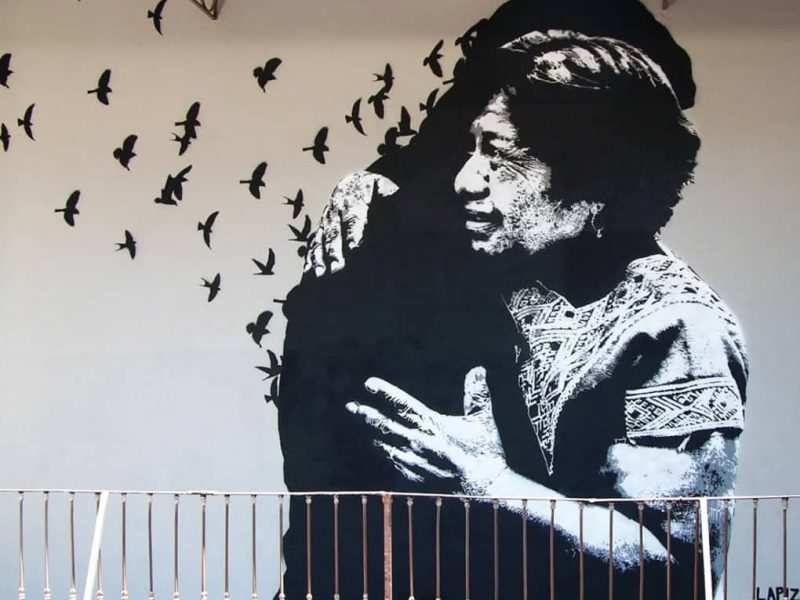 Grief on the Streets

From Bristol to Mexico, New York to Mumbai, mural artists all over the world share their grief on our streets. Paying tribute to lost icons and highlighting social issues, street artists’ reflections on grief are public, personal and extremely poignant.

Here are a few of our favourite pieces…

An unlikely pilgrimage site for Prince fans has bloomed on a residential street in a nondescript suburb of Sacramento. Shortly after Prince died in 2016 Christine Stein painted a 6-foot-tall mural of the musician’s face and placed it against a shrub that served as his hair in the front yard of her home in Citrus Heights.

‘Huge geek and Marvel fan’ Danny McDermott painted this incredible 11ft mural on the wall of The Barn Youth Centre in Glasgow when Stan Lee died in 2018. The piece depicts Stan Lee alongside 22 Marvel Characters including Captain Marvel and The Incredible Hulk.

The Absence of Embrace (El abrazo ausente) by Lapiztola

Murals produced by the street artist collective Lapiztola are highlighting Mexico’s social and political issues, from disappeared students to drug lords and migrants.

The 27 Club by Kobra

Situated on the corner of Rivington and Forsyth Streets in New York this work, by Kobra, memorializes Amy Winehouse, Kurt Cobain, Janis Joplin, Jimi Hendrix and Jim Morrisson and their membership in the so-called 27 Club: The musicians and artists who died at 27.

The Nelson Mandela Mural is Shepard Fairey’s first work in Africa. It is a 10-storey public artwork on Juta Street in Braamfontein, Johannesburg, completed in September 2014. It pays tribute to Nelson Mandela and the 25th anniversary of the Purple Rain Protest.

There is Always Hope by Banksy

One of Banksy’s most iconic pieces of artwork is the little girl on South Bank in London, holding a heart-shaped balloon. The heart-shaped balloon is believed to represent love, hope, innocence, childhood and self-confidence. It’s thought that the piece symbolises losing something which is within your grasp.

Good Grief, Bristol (May 11th to 17th 2020) is a new festival to help people talk, think and learn about grief. With dozens of events taking place all over Bristol, Good Grief will bring together speakers, film screenings, exhibitions, workshops, music, spoken word, a pop-up shop and a Memory Kitchen. To find out more, visit our homepage.